Investing in the future of local public transport in the Rhine-Neckar region.

Rhein-Neckar-Verkehr GmbH maintains a fleet of almost 400 buses and trams for over 173 million passengers a year. The company therefore has every reason to develop its own training workshop. It relies on Lucas-Nülle for the didactic concept and is completely won over by the technology as well as the service.

THE PROJECT: ACHIEVING MORE AUTONOMY IN VOCATIONAL EDUCATION AND TRAINING

In a way, Peter Blass sees the achievements of the past year as no more than a first step. The Head of Industrial Training at Rhein-Neckar-Verkehr GmbH (rnv) is already thinking ahead. Previously the company had cooperated with Deutsche Bahn when it came to training its 35 or so apprentices. Now they have access to their own state-of-the-art workshop in Ludwigshafen. “In the medium to long term, we want to further strengthen our portfolio of expertise and perhaps open our own training centre,” explains Blass.

His optimism is based on some of the company’s strategic decisions in recent years which put a greater emphasis on the area of vocational education and training as a whole. According to Blass, the shortage of skilled workers is an important reason, but not the only one: “The trend at the moment is back towards increasing the level of bus and tram maintenance expertise within the company. Furthermore, local public transport is changing a great deal, particularly in relation to motor vehicles. We therefore want to give our employees appropriate ongoing training.”

THE NEW TEAM RELIES ON LUCAS-NÜLLE FOR THE DIDACTIC CONCEPT

The Head of Training has expanded his team by two automotive trainers with the addition of Alexander Menge and Tobias Backes, who also took on the job of planning the training workshop. Menge supervises the automotive mechatronics technicians and Backes the electronics technicians for operational technology. “When I started at rnv, the premises and furniture were already in place,” Menge recalls, “so it was just a matter of deciding on our didactic concept and the teaching materials we would use to implement it.” 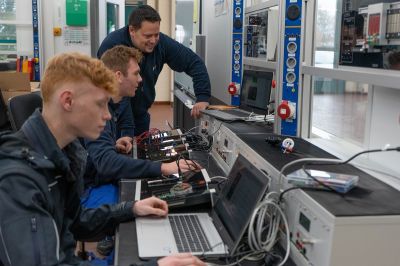 It quickly became clear what direction to take, says Backes. “We want to offer futureoriented training, so on the one hand it was important to have modern technology with the appropriate interfaces and digital learning content, and on the other for it to be as practically relevant as possible,” he explains. When they were looking for a supplier of this kind of technology, Menge thought back to his vocational school days and the exercises they used to do on the realistic 4-mm plugin system.

So in the end, the Ludwigshafenbased trainers contacted Lucas-Nülle themselves. “Of course we also talked to other suppliers,” Menge recalls, “but only Lucas-Nülle offered such quality workmanship and modern design.” The management of the public transport operator for the metropolitan region encompassing Mannheim, Ludwigshafen and Heidelberg were also quickly won over by the trainers’ plans. After just six months of planning, the new workshop opened in early September.

“In this regard, we quite deliberately want to bang the drum for Lucas-Nülle,” the industrial trainers emphasize. “The open and friendly way we were dealt with and the service we received were amazing. We were really impressed,” explains Blass, adding: “Our IT colleagues who helped us set up the equipment said the same.”

Based on this experience, the rnv training workshop will continue to rely on Lucas-Nülle for the next stages of its development. “In the coming year we plan to buy VOCANTO licences,” says Menge, looking ahead. “In our view, the move towards e-learning, with its flexibility in terms of time and place,is only logical now.”

IN THE AUTOMOTIVE SEGMENT, HYBRID AND ALL ELECTRIC VEHICLES ARE CENTRAL TO FURTHER PLANNING

Besides the subject of e-learning, the company also wants to buy several training systems on the topics of Hybrid and All Electric Vehicles and High Voltage in Vehicles. Although rnv already has electric buses in service, they are maintained and serviced externally. In future, the company wants to switch over from inductive charging at selected stops to fixed charging stations at the depot. “Unlike before, we will maintain and service these electric buses ourselves,” Blass explains.

In the medium to long term, rnv is committed not only to training automotive mechatronics technicians for system and high-voltage technology, but also to raising the level of Hybrid and All Electric Vehicles expertise in the company as a whole. “At the same time, we also want the new systems to be used for further training and professional development within the company,” Blass explains. These considerations particularly apply to high-voltage technology, because all the indications are that responsibility for diagnostics and maintenance of the HV systems will increasingly pass from the battery manufacturers to the workshops. “So we will be kept busy for the foreseeable future,” says Blass with a wink. 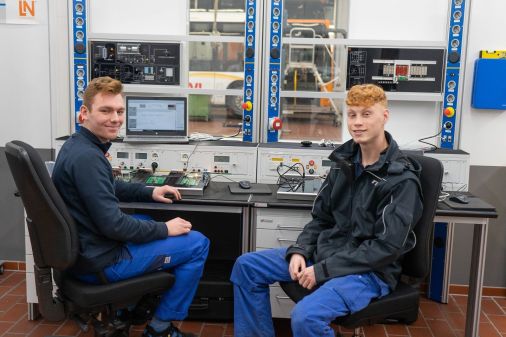